After 400 Chinese workers sacrificed here in Japan for 75 years, the Japanese said this in mourning 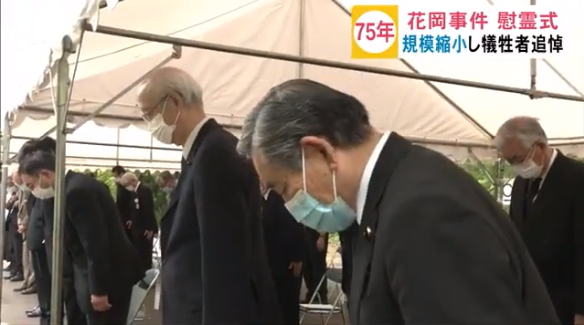 Overseas.net, July 1 Nearly a thousand workers who were forcibly captured by the Huagang Zhongshanliao concentration camp in Akita Prefecture, Japan, during the war of aggression against China 75 years ago, carried out riots because they could not bear the abuse of inhumans After being suppressed, more than 400 people died here, known in history as the "Huagang Incident." Seventy-five years later, in Odate City, Akita Prefecture, a mourning ceremony was held. The mayor of Odate City emphasized that the tragic memory of will not be wiped out and will be passed on to future generations in language.

According to Japan’s Akita TV station, on June 30, the mourning ceremony was held in Odate City, Akita Prefecture. Due to the continued spread of the COVID-19 epidemic, the scale of the ceremony was smaller than in previous years. The Chinese Survivors Association did not attend the meeting, but issued a memorial. The representative of the speech said in Chinese: "The teacher who never forgets the past. We will commemorate our predecessors here next year."

After mourning for the victims, the mayor of Odate said in a statement that the sad memory does not Will be wiped out and will be passed on to future generations in language. "No matter what the circumstances, depriving one's freedom and hurting one's dignity are cruel acts and are not worthy of forgiveness." He also said: "The memorial service is first of all to pay tribute to the predecessors. I really believe that this The inheritance of the incident will serve as a bridge, bond, and basis for friendship between Japan and China." People who participated in the memorial service prayed for the victims, but also vowed to maintain peace forever.

During the Japanese war of aggression against China, Japanese aggressors have kidnapped more than 40,000 Chinese from China to work in Japan since 1943, and more than 1,000 of them were taken to Hanaoka-cho, Akita Prefecture ( Now in Odate City). On June 30, 1945, the Chinese laborers were unbearable to endure brutal oppression and persecution and held a riot, which was suppressed by the Japanese side. More than 130 laborers were tortured and killed in three days. Including torture deaths, more than 400 Chinese were killed.

In 2017, a total of 17 people including two Chinese survivors and family members of the deceased filed a lawsuit, requesting the Japanese government to compensate the loss and apologize. The 94-year-old plaintiff, Hebeiese Li Tiehui, wept in court and said that he had to work 15-16 hours a day and eat grass to endure hunger. His face and fingers are still injured by torture. In 2019, the Japanese court rejected the claim. (Overseas Wang Shanning)