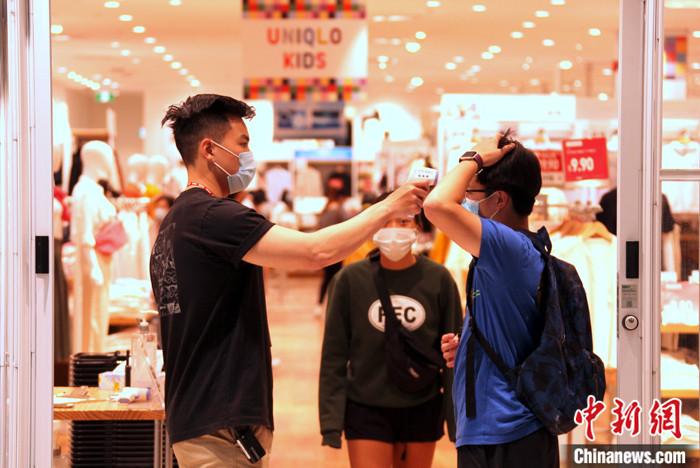 June 24 local time, In a shopping center in Toronto, Canada, merchants measure body temperature one by one for customers. On the same day, Toronto, Canada's most populous city, entered the second stage of economic restart, and a large number of businesses and service agencies could be re-run. Photo by Yu Ruidong, a reporter from China News Service

The interim regulations were formulated on the advice of public health officials. The authorities cited that indoor spaces that require mandatory masks include shops, farmers’ markets, libraries, community centers, churches and temples, exhibition halls, conference halls, theaters, hotels, and various indoor leisure and entertainment venues. The regulation is tentatively implemented until the beginning of October.

The City of Toronto said that more and more scientific evidence shows that wearing a mask is a low-cost and acceptable measure to prevent the spread of viruses.

The Peel area west of Toronto also made mandatory the wearing of masks in indoor public places on the same day.

Prior to this, the Toronto Public Transport Bureau has decided to force all public transport passengers to wear masks as of July 2.

The mayors of some cities around Toronto have requested the Ontario provincial government to introduce regulations for mandatory wearing of masks, but the provincial health department responded on June 30 that there is no need to implement this measure at the provincial level.

Ontario Governor Doug Ford said recently that he highly recommends wearing a mask, but it is not mandatory because of difficulties in implementation.

Quebec announced on June 30 that, starting July 13, masks must be worn when taking public transportation in the province. The province’s current cumulative cases account for approximately 53% of the country’s cumulative total.

Canada’s Prime Minister Trudeau recently told the media that although there are still some “hot spots” in the epidemic, the overall number of cases and hospitalizations in Canada are declining.