Four agents of the Philippine Army were shot by the police, the military blamed the police for reporting fraud

Overseas.com, July 1st On Tuesday, local time (June 30th), the Philippine Army held a solemn ceremony at Villamo Air Force Base in Manila to mourn the day before Comrades who were killed in Holo City, Sulu Province. It is reported that the four deceased were all Philippine Army intelligence personnel and were shot by police near the Holo police headquarters.

According to the Philippine "Daily Inquirer", the four deceased were 39-year-old Major Marvin A. Indham and 33-year-old Captain Owen B. Managuelod. , Sergeant Jaime M. Velasco, 38, and Corporal Abdal Asura, 33. Corporal Asura was a Holo. He was in charge of driving a vehicle during his lifetime. After his death, he was buried immediately according to local traditions. The remains of the other three were airlifted to Villamo Air Force Base for military courtesy.

The military’s statement revealed that Major Indam was the commander of the Ninth Intelligence Force. When the shooting took place, he was carrying out the task of tracking terrorists with four other people. The bombing attacker is believed to be related to bomb expert Mondi Sabadjaan, who has links to the Islamic State. At 2:26 pm on June 29, on the way back, the four SUVs were stopped at the quarantine checkpoint guarded by the police, about 50 meters from the police station. Major Indham got out of the car and negotiated with the police. He was shot and killed by police who were 5 meters away. Corporal Asura immediately got out of the car and was also killed. Captain Managuillod and Sergeant Velasco did not get off the vehicle and were shot at close range. Another military intelligence officer was on a motorcycle to perform missions with the four above, and was spared. 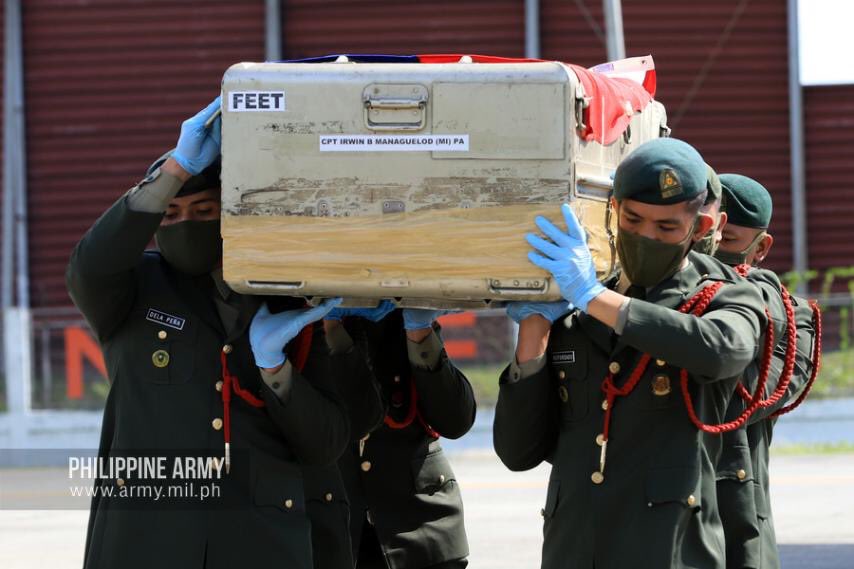 The Philippine National Police Agency (PNP) spokesman Brigadier General Bernard Barnac announced that the nine police officers involved have been disarmed and have taken restrictive measures and are currently detained In Sulu province. Police reported that Major Indham was about to escape when the incident occurred and the police arrested him. The report said that the soldiers pointed their weapons at the police after getting out of the vehicle. Before the soldiers pulled the trigger, the Philippine police shot themselves. The Philippine National Police considers this incident a misunderstanding because the police "may not be able to properly confirm that the soldier is a colleague of the security forces."

The military quoted eyewitnesses in the statement saying that there was no dispute between the two sides and that there was no provocation by the military personnel. Army spokesman Colonel Ramon Zagara pointed out in a text message sent to a reporter in the Daily Inquirer that the four soldiers did not carry weapons and explained their identity to the police.

Philippine Army Commander Lieutenant General Gilbert I. Gape reprimanded the police’s claims in answering reporters’ questions. He accused the police’s initial report of being fabricated and full of contradictions, like a movie. , Very misleading. Lieutenant General Gape asserted that this was a "murder" and that the heads of the police departments in Sulu and Holo must be held responsible. He bluntly said: "There is no misunderstanding at all, our troops have not fired a shot. If it is a misunderstanding, do you think the police will not be injured?" To find out the truth, without intention to create hatred between the army and the Philippine National Police. "We are a professional organization and will not let this incident pass. The Army will provide justice for the heroes who died." He said: "This tragedy has caused us huge losses in the pursuit of peace in the Sulu region. We remember and commemorate them for The sacrifices made by the state express condolences and condolences to their families, and we will ensure that the necessary assistance is provided to the families." (Overseas Net Chen Yanan)