61 people were diagnosed with COVID-19

Okinawa Governor Yucheng Danny held a press conference to announce the situation. Jade City Danny said that he felt "shocked" and "extremely sorry" for the news, and said that he "had to strongly doubt the anti-epidemic measures of the US military stationed in Okinawa." 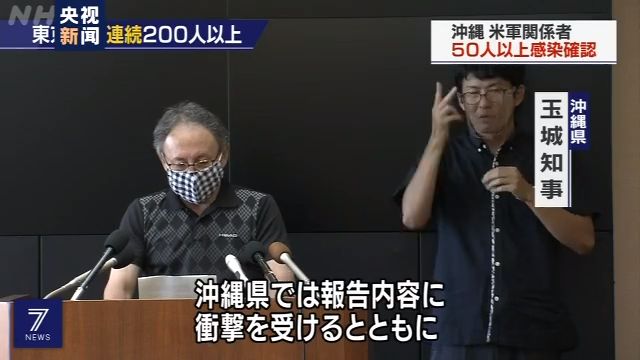 Xie Hua Xiichiro, Deputy Governor of Okinawa Prefecture It said that the county had requested the closure of two U.S. military bases at Futianma and Hansen Camp where multiple infected persons appeared, and asked the base to raise the epidemic prevention level to the highest level.

According to the Asahi Shimbun report, from the beginning of July, the two bases of the US military Futenma and Hansen camp have successively been diagnosed with new coronary infections. But in this case, the American soldiers at these bases also left the base on July 4th, the American Independence Day anniversary, and held parties to celebrate.

Reports that Okinawa is working hard Prevent the spread of the epidemic to residents of the county. At present, on the one hand, Okinawa requires the US military to publish information on infected persons and close contacts. On the other hand, it also requires residents of the county who have been in contact with US soldiers to seek medical treatment immediately if they have a cold or other symptoms.